Last week, Tuesday to Saturday, Mrs SC was working in Brussels. Apart from the length of her stay – four working days – there’s nothing unusual about this. We moved home from Belgium at the beginning of the year, but she seems to spend a couple of days back there for one committee or conference or another every second or third week. This time around, I joined her.

The weather was fine and the autumn not nearly as advanced as back home in Sweden. The days were longer and generally warmer and the sun shone for much of the time. While Mrs SC worked, I travelled around the city taking photos. 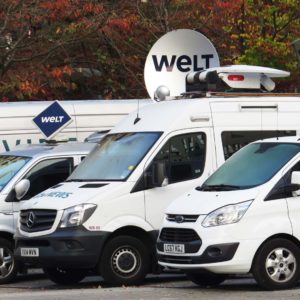 My plan was to get pictures of all the sights and sites I’d always planned but never managed to photograph while we lived there. I thought I might get three or four blog articles out of the exercise. Well, I managed it in a way, and in a way I didn’t.

I did get photos for at least four blog articles, and you can expect to read them over the next few weeks. I also failed to get photos of a number of places I had in mind to visit.

One reason for this was that our visit coincided with the EU’s October Summit. (The Anglophone international press insisted on calling this the Brexit Summit, but that was just the matter of business on the 17th. See here.) Our hotel was occupied by teams of TV journalists and traffic in the city was constantly interrupted by blue-light-and-loud-siren motorbikes guiding smokey-glassed black saloons.

Another reason was, simply, I am and ever remain a time optimist. I just didn’t get around to everything I thought I might.

One thing I’m not going to be writing about in the immediate future is Belgium and it’s relationship with its former African colony. It shames me to observe that I’ve managed to write 40-odd blog posts about Brussels over three years, but barely touched on the horrific history of Belgian King Leopold II’s private fiefdom the Congo “Free” State, its Belgian Congo successor, and the post-colonial Congo/Zaire.

There are traces of the story all over Brussels – in the street furniture, the antique shops, the French speaking black African population… Let’s say I kept putting off writing about it because I hoped the infamous Royal Museum for Central Africa would re-open. Let’s say that.

The Museum closed in 2013 for renovations (and a thorough reappraisal of the way it presents the Belgo-African relationship). It remained resolutely shut throughout our time in Brussels. The latest information is it will re-open on 9th December.

I actually thought I might get out to the museum site during this visit. (It’s away from the city in the Flemish Brabant municipality of Tervuren.) The architecture is reputedly worth the trip, but time was against me. So there’s at least one thing I have to return to Brussels for in the New Year. 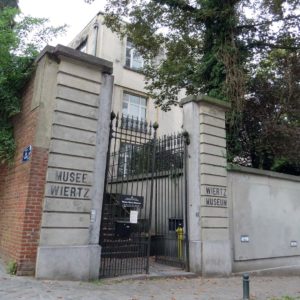 Then there’s the Wiertz Museum. As Wikipedia notes, “Contemporary opinions of the museum and the works therein are mixed.” And, quoting from The Economist, “perhaps the worst painter to have a government-funded museum all to himself, at least in the free world.” With publicity like that, I felt for years I really ought at least to try to visit. Just not quite enough to actually make the effort.

Well, this time around I decided I would. It helped that the hotel we were staying in was relatively close. The museum is open, so say the guide books, between 10 and 12 o’clock every morning save Mondays. On Thursday morning I took myself off in search of the place. And I found it, indeed. Here’s a photo of the gates standing open by way of proof. Unfortunately it was the gates alone that were open. The front door was locked. There was a bell-push labelled Musée, but no one answered when I rang. The building had a desolate air. I rang again. Same result.

Later, in the Tourist Information Centre in the Grande Place, the woman I spoke with insisted I was mistaken. No, no, she said. The museum is open! You must try again tomorrow.

This is the level of assistance I have come to expect from the Brussels TI Centre, though I always hope for better.

But let me not close on a sour note. It was fun to be back in Brussels and to enjoy the city and especially to break out the camera again. I don’t seem to have been photographing nearly as much since moving home, and I realise how much I miss it. Here are a few photos from around the Schuman Roundabout from Wednesday morning, and from the Parc de Bruxelles from Thursday and Friday afternoons.

And, as I say, look out for more Stops and Stories from Brussels coming down the line.