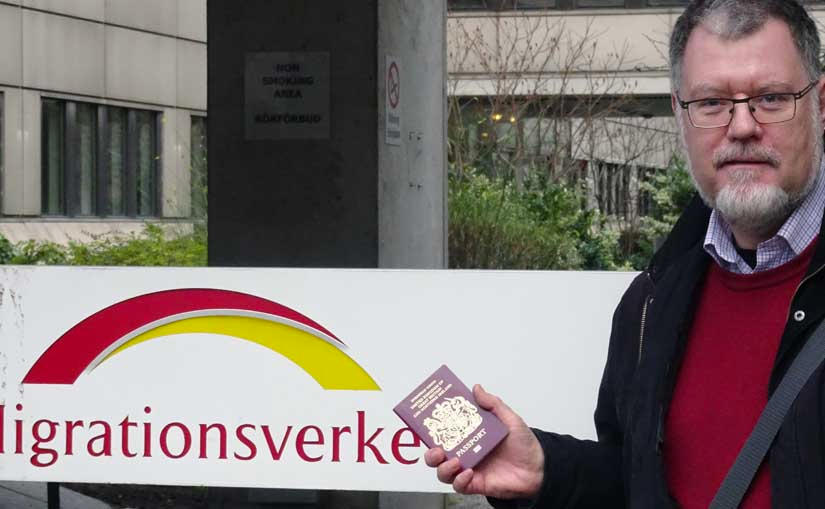 In the weeks after the British referendum on 23rd June, verbal and physical attacks on European Union citizens living and working in Britain were coupled to the question of what would happen to British citizens living in the EU. There was a nasty feeling that my fate was suddenly being played around with by people over whom I have no control and for whom I have no respect.

It was time, finally, to get my finger out and apply for Swedish citizenship.

One of the requirements for seeking Swedish citizenship is to submit the identity documents that you have from your home country in the original. To be sure they stay safe and reach their destination, this means using registered post. Not a problem, though the authority – Migrationsverket, the Swedish Migration Agency, based in Norrköping – took their time acknowledging receipt. Eventually, however, I got a letter from them to say they’d received my application and my British passport.

The Migration Agency also pointed me to their website. After I’d set up an account and identified myself electronically, I got access to “my Migration Agency web page”. There they promised I would be able to follow the course of my application. The first time I logged in it was a small thrill to see that my application was being processed.

It wasn’t until after I had sent off my passport that I actually realised how long the processing time would be. In my naivety I’d assumed that – for me – applying for Swedish citizenship would be pretty much a formality. After all, I’ve lived in Sweden for close on 30 years. I’ve had permanent residence for the last 20. Why would it take them much time to decide favourably?

The mills of bureaucracy grind exceeding fine, exceeding slow. Also, to be fair, the Migration Agency is under considerable pressure coping with staff shortages, the influx of refugees from Syria and elsewhere, and threats against their buildings and personnel. Not to mention Brexit, which has seen the numbers of British people applying for Swedish citizenship rise steeply.

No one jumps the queue

When I was on the Migration Agency’s website to download the application forms, I saw that the expected time for processing a citizenship application was four months. That seemed a lot and I rather thought that it would only take them about a month to deal with me. So, after a month I phoned them. They were very clear – no one jumps the queue and everyone is processed in due order.

So there we were – my passport in Norrköping for the next few months and me in Gothenburg or Brussels.

That didn’t seem to be a problem. I’ve noticed how easy it is to travel between Belgium and Sweden without showing your passport. This is because both countries are members of the Schengen area within the European Union. In fact I have more than once travelled back and forth between the two without showing any sort of identity document.

Not a valid travel document

At the end of July, Mrs SC and I travelled to Denmark. Crossing from Helsingborg in Sweden to Helsingør in Denmark was easy. The reverse journey was less so.

Because of the influx of refugees and migrants finding their way to Sweden (which – to be fair – had initially opened its borders to people fleeing the civil war in Syria), special immigration procedures had been imposed at Helsingborg.

The border police didn’t like my Swedish identity card. My card was issued by the tax authorities, not by the police. It doesn’t include my nationality, so it’s not a valid Schengen travel document.

The chap who stopped me was very reasonable, and after checking me in his database, he accepted that I was probably not an illegal migrant or a potential terrorist (the beard not withstanding). But he warned me that I would need to carry a valid Schengen identity card in the future.

Of course, as soon as we got home there was a mad scramble to find our Belgian identity cards (which we’d brought with us but tucked away somewhere safe) just to check. And a collective sigh of relief when we confirmed what we really knew all along: that our Belgian ID cards are indeed fully fledged national identity cards.

About a month later I flew back from Gothenburg to Brussels. I won’t say that I was completely relaxed, but I wasn’t very nervous. After all, I had my Belgian identity card; I was flying within Schengen. Everything ought to go smoothly. Still, I was also conscious Murphy’s Law is always hanging like the sword of Damocles over one’s head.

And of course it dropped.

It may have been because somebody on board the aeroplane was taken ill and needed medical attention, but in Brussels the plane taxied to a different arrivals gate than usual. Leaving the plane and coming to passport control I flashed my Belgian identity card. The inspector looked at me like I was trying to pull a fast one.

Where is your passport?

I explained that I didn’t need it because I was flying within Schengen.

But this is the international arrivals gate, came the reply. You must have come from outside the EU.

No! Gothenburg– My plane flew– I came directly from– I’ve not been outside the EU!

The inspector listened stoically to my protests. He’d heard it all before.

With a look of great suspicion he made a couple of telephone calls. Finally he confirmed that indeed my plane had flown directly from Gothenburg even though it had disembarked all its passengers at the international exit.

Very reluctantly, he let me through with the caution that I should always carry my passport with me. This seems to undermine the point of Schengen, but deep down I’m actually in full agreement.

No passport, no Britain

Once I was in Belgium all went well and I didn’t need to use my identity card again until October.

Being without my British passport, though, upset one plan. I’d intended to visit my mother in September, but I had to cancel. You see, although I can (ought to be able to) travel between Sweden and Belgium with my Schengen identity card – or visit France or German, Portugal or Poland – I can’t visit the United Kingdom.

The UK is outside Schengen, so to travel to the UK from the continent I would have to have my British passport. Or a Swedish passport would do. Without either I had to postpone my trip.

Well, I thought, four months. I’ll get the passport back by the end of November.

There is no indication of how long the processing is going to take. Nor is there any indication, if there are stages in the process, which stage your application is at. There is only: “Your application is being processed” (so sit on your hands and wait). I sat on my hands and waited, but I did look and check and it seemed as though they no longer needed my passport. It was possible to ask them to send it back.

But… where would they send it?

The problem is the Migration Agency can only send the passport back to my address in Sweden. Since we’re temporarily in Brussels, we have a forwarding agreement with PostNord, the Swedish postal service. But would they be prepared to forward a registered letter?

I phoned PostNord and asked them.

Yes, they assured me. No problem. Of course we will send registered mail on to you in Belgium.

Using a form on the Migration Agency’s website I wrote and asked for my passport back. And I heard nothing more.

Other things on my mind

Now, I spent much of October and November enjoying my hernia and carcinoma (see my earlier post) so I had a couple of other things on my mind. Eventually, though, I decided I had to find out what had happened to my passport. On “my Migration Agency web page” there was still no new information, so I phoned them.

Oh yes, they said, clearly consulting a database of information that they didn’t want to share with me. We have a record that we sent your passport off as soon as we received your request.

You did! But I haven’t received it! It’s lost! It’s stolen!

No, they said, it was returned to us. Undeliverable.

So much for PostNord’s promises.

We don’t do that

But why, I wailed, why not let me know? You have my e-mail address. Or if you didn’t want to write, you could have posted something on “my Migration Agency web page”.

Once we’d established that my passport was safe at the Migration Agency, though, I felt relieved. That was when I asked if I could expect to hear from them about my application soon – it being nearly four months since I’d sent in my application.

Dear me no! Four months? Where did you get that idea? It could take up to a year to process your citizenship application. Although (looking through that secret database) there’s no obvious reason why you shouldn’t get it.

Back to the question: how to get back my passport?

In person or by proxy

The Migration Agency could send me the passport as registered post but only to my Swedish address. But as we’ve established, PostNord won’t forward it to Belgium.

My only other options are either to collect it in person or identify a proxy in Sweden to receive it. But identifying a proxy sounded far too complicated. As I knew I’d be coming back to Sweden for Christmas early in December, Mrs SC and I decided to travel to Norrköping and fetch the passport ourselves.

I get my passport back!

This is what we did, and we did it yesterday, on Tuesday 20th December. To cut a long (12 hour long) story short, we got to the Migration Agency just after midday and after about three-quarters-of-an-hour in the queue I received the passport, signed for it and took it away. It was a great relief. We celebrated with a photograph outside.

The next problem down the line will be when (if) they give me my Swedish citizenship. They will send that document also to me as a registered letter to my address in Sweden… but I’ll cross that bridge when I come to it.

Meanwhile, “my Migration Agency web page” still says my application is being processed. Not quite so much of a thrill, looking at that now.

I originally published this article on the separate Stops and Stories website. Transferred here 9 Jan 2017.

3 thoughts on “Proof of identity”