I’m trying to decide what I should write about today for Wednesday’s blog entry. I shouldn’t be in this position, not with all my planning. Everything worked out so well in August. But then I got too confident. Too confident, a bit lazy and a bit too excited about taking street photographs again on Saturday.

I wanted to share the photos on Monday. It seemed the right thing to do, before the Ring Island Party became stale. But then choosing the photos to use and writing the text took far longer than I’d allowed for. I had to pull a late-nighter and wasn’t able to post the article on the blog till half an hour before midnight. At which point Facebook refused to let me share it.

I still don’t know why. A technical glitch I suppose.

In turn, that meant what I think of as my social networking promo work got pushed forward to Tuesday. (And I still can’t get Facebook to let me share the post.)

Now, I ought to have written something earlier that I could post today. But, well, I haven’t. Or nothing that would be quick and easy to put up at any rate. So here I am on Wednesday morning, scribbling stream of conscious notes and hoping if I ramble on long enough I’ll produce something publishable.

It’s 9 o’clock in the morning as I write this and I’m sitting at the breakfast table with my notepad and a bowl of cereal. The image of a steaming pot of coffee just presented itself to my mind. Maybe I would think more clearly with a cup of Arabica. 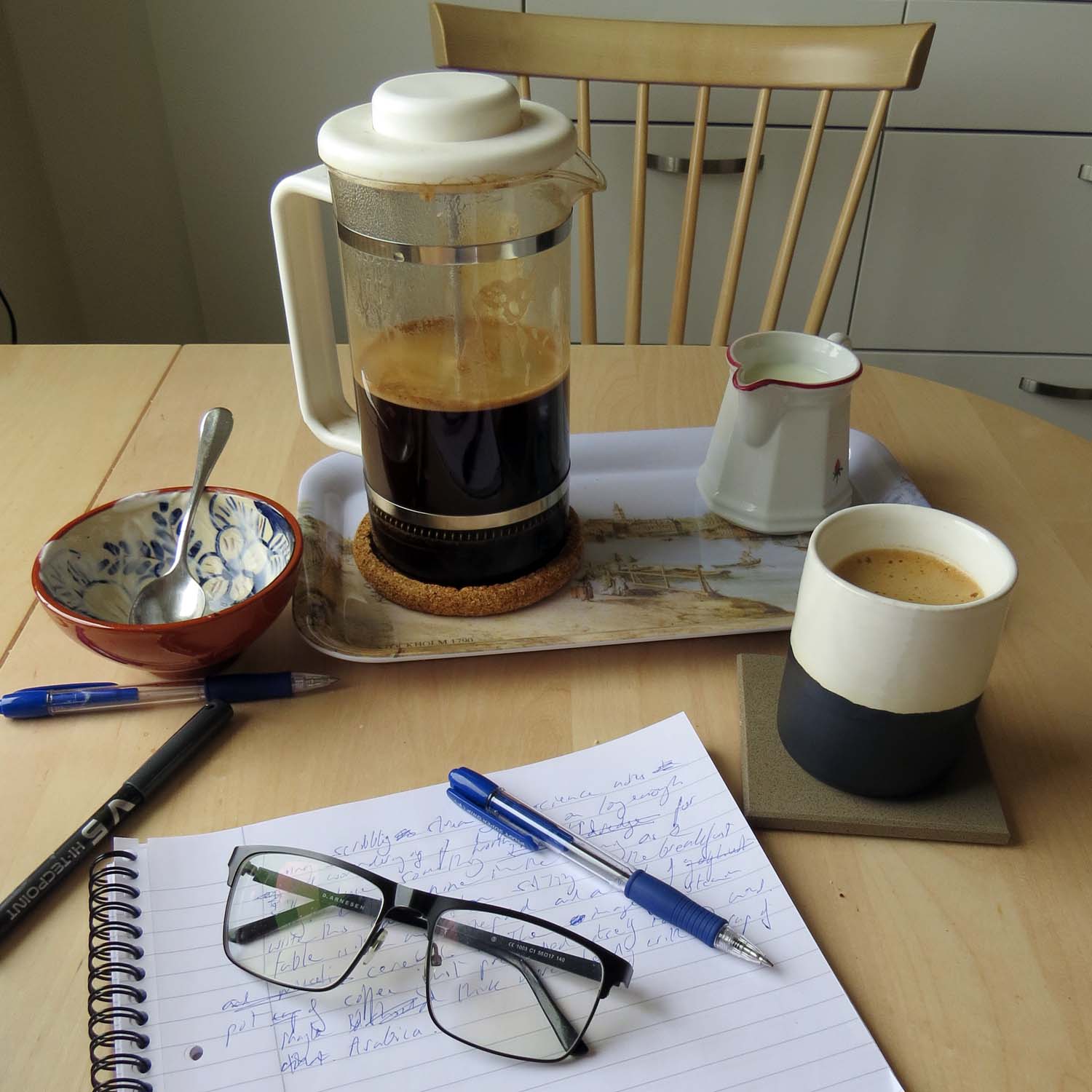 Ten minutes later. Thought, and written, and done – I’ve even taken a photograph to illustrate the text at this point. Efficient or what?

My schedule says “writing diary”, so that’s what this is. But what to write about? I don’t want to regale you with statistics. I did that last month. Let’s just say I’ve kept up the pace in August and I’m generally satisfied with that. I’ve not written every day, but often enough, and I’ve been counting hours spent writing and words transcribed and the figures are OK. Not great, but not dire.

However, what I’m writing is very disparate. I’m writing diary entries and blog entries. Roughing out letters (though, sadly, not actually completing any to send). I’ve added to the science-fiction story about Choi and Luce that I mentioned last time. Elin’s Story, though, has not moved forward.

My friend Kristina Svensson is one of a dozen or so people who tell me from time to time that they would rather like to read Elin’s Story before they die. Or before I die. She wrote me an encouraging e-mail the other day. Since we first met 10 years ago, Kristina has published and self-published about five titles. Like me she blogs about writing and photography and travel. Part of her encouragement was to remind me that writing a book is essentially no more dramatic than writing a blog post. The encouragement was kindly meant and I took it in that spirit, but I’m not convinced creative writing and writing blog posts are quite the same.

Perhaps it was Kristina’s mail, but I find myself thinking once more about self-publication.

In a dream I woke from a week ago, I was holding a very small book. It had two chapters – one with a story (I think), the other the true account of a journey (I think). The book was illustrated with fine line drawings pretending to be engravings. In the dream, as I realised what they were pretending to be, I saw the artist illustrating them. Leaning over her shoulder. She was using a fine tipped black ink pen like the 0.4 point I use to write my diary entries. The book was hardbound with a wrap-around glossy paper cover. It fitted my hand, a bit narrower and a bit taller than a normal pocket book.

I woke thinking, Yes, that’s possible. And immediately I was more awake, I thought, Well maybe not exactly like that…

I was sufficiently inspired to make some notes of the dream, which is why I can reproduce it so accurately above. And then I went on-line.

There are plenty of self-published authors and small presses producing books – pamphlets really, or chapbooks – that resemble the one I dreamt of. Of course there are. The smallest book that Amazon’s CreateSpace allows for is just 24 pages – and I was thinking 32. (Multiples of four, multiples of eight – it’s a printer’s thing. If you’ve ever worked on printing something with pages, you’ll understand.)

Perhaps some of my older blog posts would be a starting point, I thought. Maybe making it a paperback and an e-book. Something not too dramatic (thinking of Kristina’s advice and twisting it). I could sell or give away the first 50 copies (numbered and signed). Include say four colour photos to add more value.

I could also release say, 20 copies “into the wild”. I mean leave them in public places for readers to pick up and maybe pass along (à la BookCrossing.) The wild copies would have appropriate inset pages. Pages with QR codes and URLs linking to a special web page and giving people the option to comment. Report where they found the book and perhaps where and to whom they passed it along. (And of course for directions where they can get their own copy.)

Website subscribers could have the first option to buy the signed and numbered copies.

Hey! Wasn’t this article supposed to be about writing? Now you’re into self-publication.

Yes, yes I am. Let’s rein in the horses. After all, I still haven’t managed to get a subscription page up on the website yet.

A circle of cheerleaders

But it does come back to writing. The more I learn about the modern world of publishing, the more important it seems to be to promote oneself. Once upon a time authors could depend upon their publishing house to take that responsibility. All authors had to do was convince a publishing house to take them on. It doesn’t work like that anymore. (And historically it probably never worked like that for more than a quite a short period of time.)

Nowadays you have to have your own circle of cheerleaders. If you haven’t published anything before, building a subscriber base incrementally by blogging and self-promotion on the social networks is one way to go about it. And that’s one of the reasons I spend so much time writing blog articles, and a reason for keeping the blogging schedule I’ve set myself.

(And there, you see, a thousand words or so and it’s only just midday. Damn, but that coffee was effective!)