On Thursday I was taking the tram into town to Kulturkalaset (Gothenburg’s Culture Party – see Monday’s entry). We stopped at Hjalmar Brantingsplatsen, Hisingen island’s major public transport hub. Looking idly out of the window I saw a tall woman leafletting travellers as they got off the tram or stood waiting to board. That woman looks a lot like Gudrun Schyman, I thought. Then, it is Gudrun Schyman.

Gudrun Schyman is a veteran politician on the left of Swedish politics. For ten years, from 1993 she led the Left Party (Vänsterpartiet – formerly the Swedish Communist Party) to increased popularity and influence in the Riksdag (Sweden’s Parliament). In the elections of 1998 the Left Party received 12% of the national vote, its best ever result. Her own and the Party’s run of success broke in the 2002 election. Within two years she was replaced as leader and had left the Party.

In 2005 she co-founded Feminist Initiative (Feministiskt initiativ – Fi). Fi is currently Sweden’s most popular political party not in the Riksdag. It came just under the 4% threshold at the last general election. We have a new general election coming up – on 9th September – and Fi has high hopes of attracting enough support to enter Parliament. Schyman is one of Fi’s national spokespeople and a local councilor in Simrishamn (a city and municipal district in southern Sweden).

Because of the forthcoming election, it’s not surprising to see politicians out and about nowadays. Local and national politicians of all colours and inclinations are involved in debates and seminars during this year’s Kulturkalas. But it was surprising to see Gudrun Schyman apparently all on her own out in the sticks.

(We who live on Hisingen, of course, do not regard this as out in the sticks. Heja Hisingen! But mainland Gothenburgers do.)

I realised afterwards that Fi’s most well-known profile probably wasn’t actually all alone at Hjalmar. There was a Fi election booth set up nearby and there were probably fellow party members within sight. But when I saw her she was on her own handing out leaflets. This must be one of the most soul-destroying things political activists engage in. I saw one person take a leaflet and two other turn them down and nobody seemed to be talking with her.

So I got off my tram and said hello. And because I couldn’t think of anything intelligent to say, I asked for a selfie.

Now, you could say I did it just for the photo, or just to be able to write a blog article and post it here. It’s not that I am likely to vote for Fi in the coming election. It’s not that I particularly warm to Gudrun Schyman’s politics. So maybe I’m just kind of name dropping?

But that’s not it at all.

The first year I lived in Sweden, 1986, the Swedish Prime Minister, Olof Palme, was murdered in the streets of Stockholm one evening. He was walking home from the cinema with his wife and had dismissed his bodyguard. Palme was off duty. It was the first political murder in Sweden in modern times.

It was a terrible shock to Swedes. People who loved Palme were devastated. People who just the day before were comparing him with the devil, Stalin or Castro went very quiet. (I know. At the time I had some of them in an English conversation class.)

The international press had a field day. They wrote about “the loss of Sweden’s innocence” and predicted “Swedes will never be the same after this”.

Some time after, in the 1990s, the Conservative Prime Minister Carl Bildt was sitting in a Stockholm restaurant. (He may by then have been a former PM. I’ve been unable to track down the exact date for this.) As I remember his table was out on the street because it was still summer. He was also unguarded. A passer-by assaulted him. It wasn’t very violent – I believe all that actually happened was Bildt getting some food thrown over his head.

But, you see, innocence as yet unlost; Swedes as yet unchanged. Politicians still trusting they can be out safely in a public place.

In 2003, Sweden’s Foreign Minister Anna Lindh was assassinated in a Stockholm department store. She was unprotected, off duty, shopping with a friend.

The national trauma repeated itself and once again the international press wrote about Sweden’s lost innocence. Again Swedes were said to be shaken fundamentally, changed beyond recognition.

Fifteen years later, in the age of Social Media, threats directed at politicians – including threats of violence – have increased.* Yet here’s Gudrun Schyman going about alone, unprotected. Doing her political job in the run-up to September’s election. Stopping passers-by to get them to engage in the democratic process.

Getting off the tram to greet Gudrun Schyman, shaking her hand and asking for a selfie. That’s me trying to show my appreciation for her courage in exposing herself to potential attack in the service of democracy. For the courage of everyone who stands up to intimidation. I want to be counted in that number too.

Before I get carried away let me agree, it’s not a lot. And I did get the photo and this blog article out of it. (Purity of motive is hard to come by.) But I feel this way. If you feel it too, I encourage you, where ever you are, to engage with the democratic process. And why not ask for a selfie too? 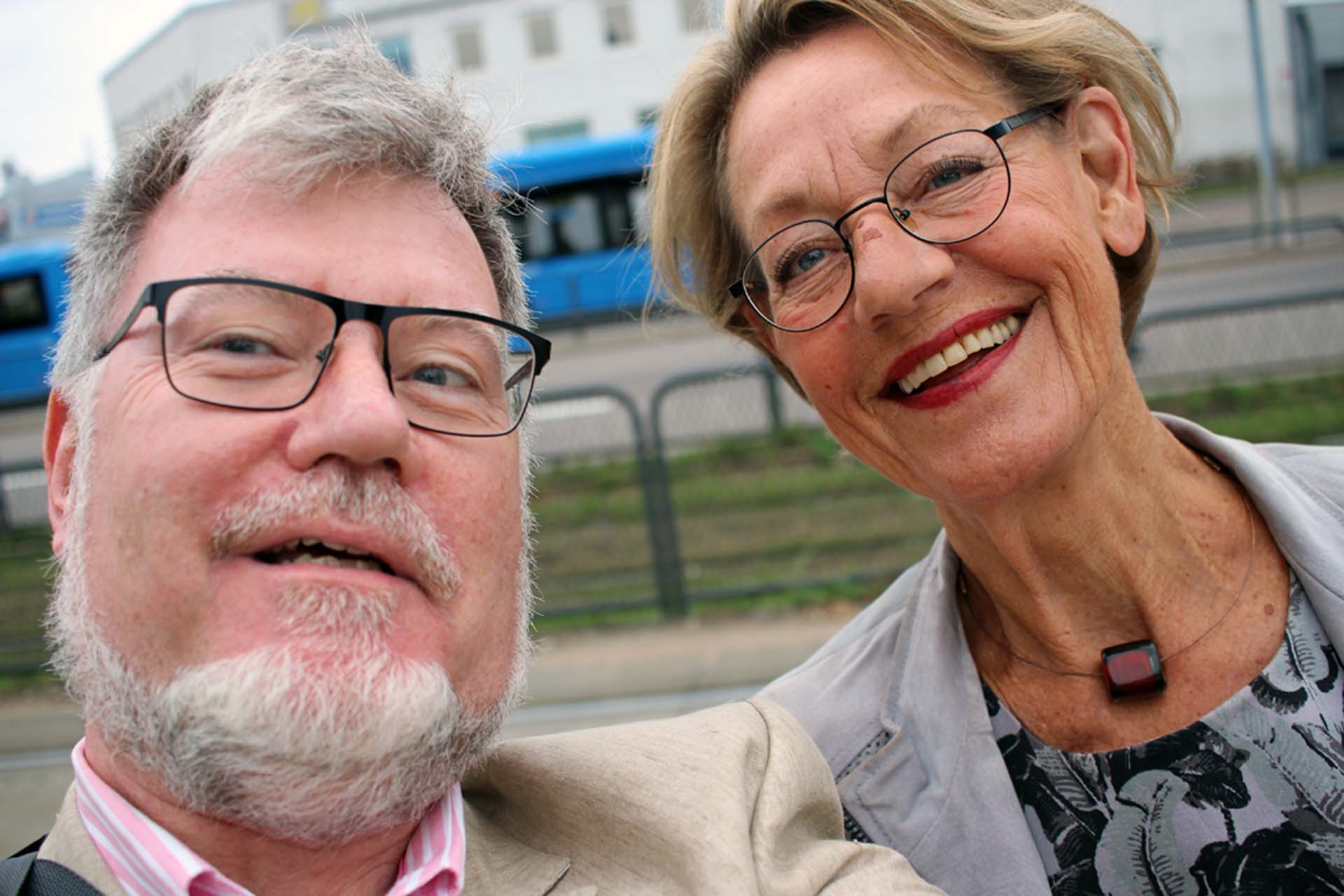 4 thoughts on “Taking a selfie with Gudrun Schyman”