Long ago in 1945 all the nice people in England were poor, allowing for exceptions.

First line of The Girls of Slender Means by Murial Spark

There’s always this question, when I walk Mrs SC in of a morning. Not her question, usually, but my own. After we’ve crossed the bridge to the mainland and more or less chalked up the day’s 10,000 steps, and the sun is shining and it’s still just before 8am, that’s when I ask myself: Do I take the tram home again? Or do I visit a café for a bought breakfast?

This morning the bought breakfast won out. (As it seems to do more and more often nowadays.) So that’s why I’m sitting here in the relative quiet of Ahlström’s café. Relative quiet because a summer-vacationing Norwegian I met here a week ago has just come in. He seems to be all alone and at a bit of a loss, and last time we got talking. About football, of all subjects I have marginal interest in. But it’s World Cup time and just then Sweden was preparing to face England and everyone – even me – was hoping for an interesting match.

In the event I nodded off during the first half and missed all the drama.

Exchanging stories, the Norwegian told me he’s lived in Strömstad most of his life. Strömstad is on the Swedish side of the border, up in northern Bohuslän, so he was rooting for Sweden. I confessed to my 30 years residency here and my current dual-national status. I said I’d consider myself a winner whoever came out of the match ahead.

So now, on the morning when England will play Croatia, I’m a little concerned we are going to have to talk football again. Not yet though. He’s deep in a newspaper and I’m scribbling away in my notebook.

My latest writing diary is overdue. If I was strict about the schedule I set myself earlier, I would have written this last week. The Paddan trip was fresh, though, and I wanted to share the photos. But now…

In my last reading diary I mentioned one of the books I read last month was Muriel Spark’s The Girls of Slender Means. I actually wrote a paragraph on it that I cut from the diary entry. The entry felt too long with it included. Besides, what I wanted to say had less to do with the story and more with the style and way the book was written. So, more appropriate to expand that paragraph here.

Muriel Spark was a Scots author who lived and wrote from the late 50s, first in London then in Italy (with a brief interlude in the USA). I believe she was writing up until her last years – she died at 88 in 2006. But her period of greatest success was in the late 50s and 60s. Probably her most well-known book is The Pride of Miss Jean Brodie, though The Girls of Slender Means is another of her early successes. A little before either – in 1960 says this BBC Scotland bio – came The Ballad of Peckham Rye.

I’m not sure if I ever read Jean Brodie. I think I did, but all the scenes I remember are coloured by the film that was based on the book. The young Maggie Smith played Jean Brodie and it’s her face, her pronunciation of Edinburgh Scots, that I see and hear now. I certainly never read Slender Means till just last month. But I did read Peckham Rye, probably when I was in my twenties.

In The Ballad of Peckham Rye a Scot, Dougal Douglas (who may be the devil incarnate or at least one of his demonic helpers), disrupts life in the London suburb of Peckham for everyone he comes in contact with. Douglas claims to be carrying out research on the moral character of the people he meets and to be gathering material for a novel. He does this by snapping up snippets of speech, expressions, turns of phrase, slogans, which he writes into a notebook. He plans to use the quotes as identifying verbal tics for his fictional characters.

This stuck in my head because, at the time, though I was fascinated by the idea I couldn’t see how you could actually pull it off. Clearly I should have followed up reading The Ballad of Peckham Rye with The Girls of Slender Means. This is exactly what Muriel Spark does to construct Slender Means and reading this book brought my memories of Peckham Rye back so clearly.

The Girls of Slender Means

Slender Means has a large cast of characters. The young women (mostly young) who live in the London hostel called the May of Teck Club “for ladies of slender means”. Each of the significant characters is identified by her verbal tics and habits. Jessica Child uses lines of poetry to teach elocution. Jane Wright, the Club’s gossip (“I’ve got something to tell you”) is taken up with “brain work” in “the world of books”. Greggie – Miss Macgregor – knows the Club’s history and its rules and regulations and tries to get the girls to behave. Deborah Markham has her expressions: “filthy lunch”, “ghastly film”, “desperately well”. And then there is Selina Redwood’s daily phrase – her morning and evening mantra of self-improvement.

Poise is perfect balance, and equanimity of body and mind, complete composure whatever the social scene. Elegant dress, immaculate grooming, and perfect deportment all contribute to the attainment of self-confidence.

The men who appear in the novel too, boyfriends and potential husbands, are also identified with their own verbal tics. Rudi, the Romanian with his somewhat skewed English and habit of adding “by the way” to his sentences at slightly incorrect moments. Nicholas Farringdon and his affected air of ennui and “anarchist” pronouncements, apparently brilliant but actually hollow. (“Every communist has a fascist frown; every fascist has a communist smile.”)

Even the undifferentiated characters are given collective characteristics. The youngest girls at the Club who share a dormitory, for example, are frequently likened to birds. “‘Really,’ said the voice of the dormitory later on, a twittering outburst, ‘what a wizard sense of humour!’”

Coupled with these verbal tics, Muriel Spark also gives a lot of attention to other sounds, especially where these sounds interact with the people in the Club. Birdsong, music on the phonograph and speech on the radio, a girl playing scales on the piano, laughter.

Someone was shovelling coal in the cellar, having left open the green baize door which led to those quarters. The telephone desk within the office rang distantly shrill with boy-friends, and various corresponding buzzes on the landings summoned the girls to talk.

Don’t misunderstand me. This is not just a book of fragments. There is a story – several interwoven in fact. The book is set firmly in its time – between VE day (8th May 1945) and VJ day (15th August 1946). (The framing story takes place a few years later.) There is comedy and tragedy and in good Chekhovian style the bomb that is mentioned on page 33 explodes with dramatic effect on page 114.

But what fascinates me is the way Muriel Spark writes in a collage of quotes and references which are so well interwoven that by chapter 4 (page 52 in my book) she can write a whole page without once mentioning a name and still you know who it’s about.

Each character needs their unique voice

I suppose every writer does this to some extent. Each character needs their unique voice and that may involve certain verbal tics. But I think it’s usually achieved more by character specific descriptive phrases or character specific actions. I just can’t think of any writer I’ve read who focuses so much on sound and speech and does it so thoroughly or consistently. There is a strong temptation to try doing it myself, though I doubt I could carry it off. 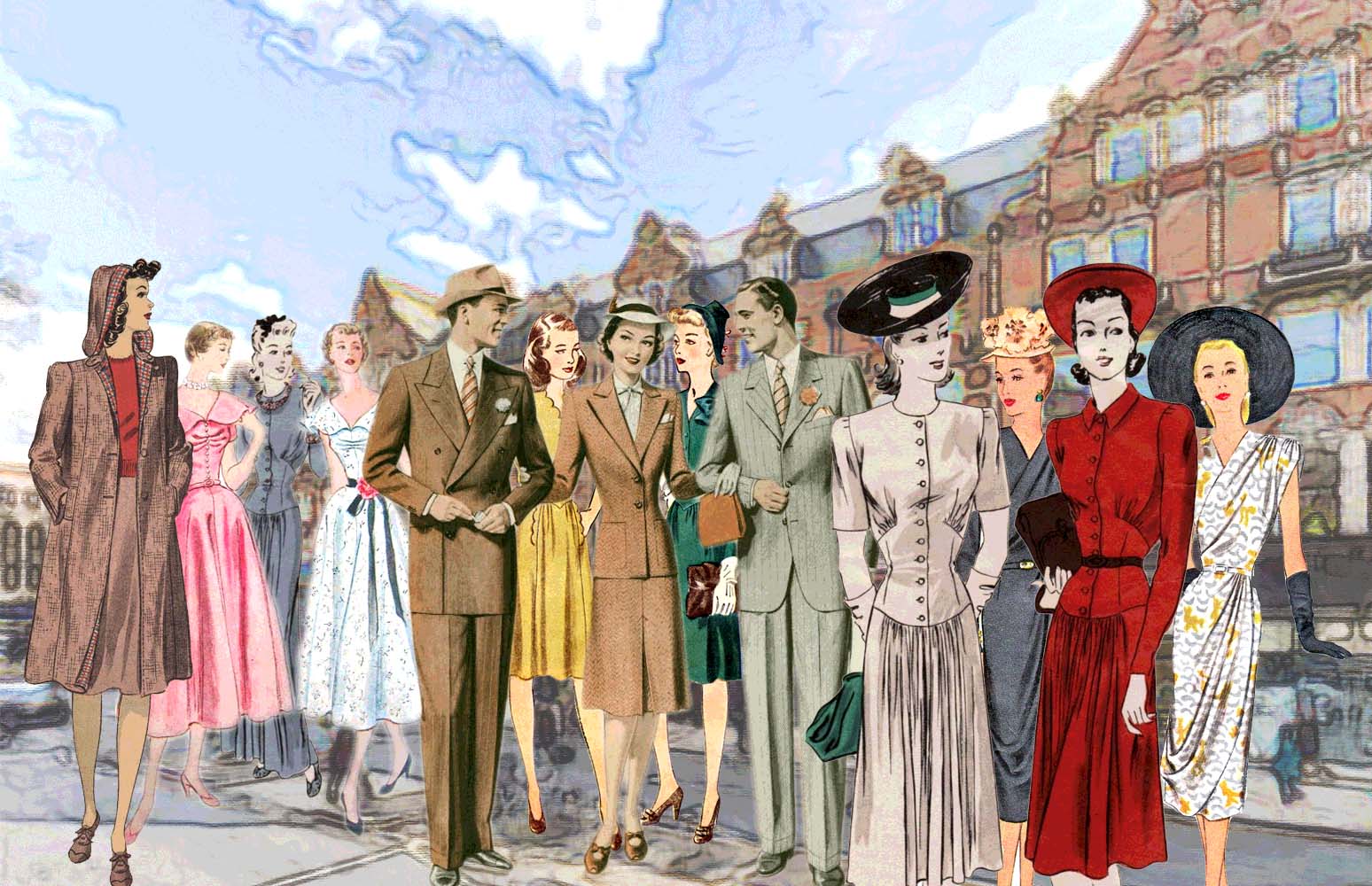 My Norwegian has found someone else to talk to. A small group of other tourists, Swedes and Germans by the sound of their accents. They are loudly in discussion about immigration. I do not want to find myself drawn into that – time to move on. I tip my hat politely as I leave.

The illustration, as you can probably tell, is composed of drawings illustrating dress patterns from the 1940s and early 1950s. Mostly I culled these from Etsy adverts selling vintage clothing patterns. The background image is of Kensington Highstreet, seriously messed around with.

2 thoughts on “Words of slender means – a writing diary entry”