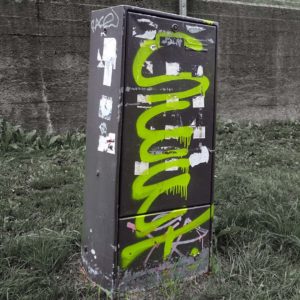 Have you seen them? These unlovely metal boxes standing around along the road, usually against a wall but sometimes on the curb. I haven’t got a good name for them. Wikipedia says they are “electricity enclosures”, but if you do an image search on Google you find more hits on “electrical enclosures”, “electricity cabinets” or “utility boxes”. When I’m talking I find “electricity boxes” comes most easily off my tongue. They’re often painted in a municipal drab grey-green, or a grey-brown, or they’re left in their original (I guess) galvanised steel finish.

I’m not an electrician, so I don’t really know what their purpose is, but obviously it has to do with housing electric connectors. Presumably they channel power and maybe even directions to electrical devices in the urban environment. The thing I’m most sure they’re used for is controlling traffic lights. Listen and you can hear them clicking and buzzing in sync with traffic lights changing.

They are not an attractive element in the urban landscape. But they are ubiquitous and because we see them so often, we often don’t notice them. We don’t notice them until something about one of them makes it stand out. Perhaps it’s been involved in an accident, perhaps the door is hanging off. Or perhaps it’s been blitzed by a crew of taggers. Maybe it’s being used as an unofficial notice board, displaying sad pictures of lost dogs or cats. Or, more often, peeling cellophane strips of once adhesive tape, some still with scraps of paper corners attached. 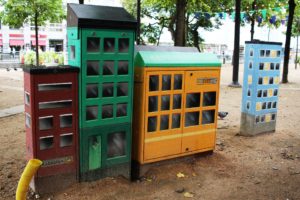 Down in central Gothenburg the other day, at Brunnsparken our major bus and tram hub, I found a collection of electrical cabinets tucked away behind the public toilets. Someone had decorated them so they look like a small collection of tower blocks. This could be part of a concerted effort to brighten up Brunnsparken. Or perhaps not just Brunnsparken, maybe it’s the start of a major re-purposing of the city’s electricity boxes as urban art canvases.

Though I guess not. Gothenburg municipality has rather a puritanical view of graffiti. They might have sanctioned it in this one place, but they’re unlikely to be encouraging more of same. Still, the art has certainly improved the look of these metal cabinets, so it would be nice.

In Brussels many of the utility boxes were decorated. Sometimes quite strikingly. Not all the boxes by any means, but enough to be noticeable. Enough to make me think that perhaps the Brussels authorities – or at least some of the 19 municipalities that make up the city – have a more generous perspective than Gothenburg. Maybe they do. But I still don’t know for sure if the Brussels municipal authorities were actively encouraging it, or just turning a blind eye. 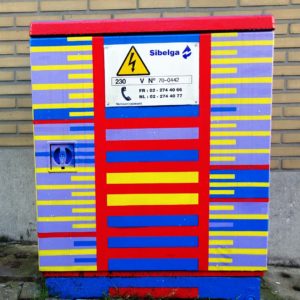 There did seem to be a degree of territoriality in Brussels utility box art. That could have been engineered by the authorities, but it might just have been standard graffiti artist behaviour. I noticed it first when I set out to document the work of the local artist on the streets in Uccle where Mrs SC and I lived. He was clearly inspired by geometric abstraction and all his cabinets were carefully painted in grids and boxes.

I know the artist was a he, incidentally, because he was the only one I ever saw at work. Sadly, it was quite early in our time there and I was hurrying on an errand. I didn’t stop to speak with him. I thought I’d be sure to see him again, but no. Never again. I never saw any of the other artists either. I think this is the reason I doubt the paintings were really sanctioned. If they were sanctioned I’d have expected to come across some of the artists at work, at least now and again. But it seemed they were doing art as a hit-and-run exercise.

Anyway, setting out to collect the work of our local Piet Mondrian, I strayed just a few streets away into the territory of another artist. What a difference! These utility boxes were decorated with pop art cartoons and slogans. Sometimes in English. So I started collecting photos of these as well. 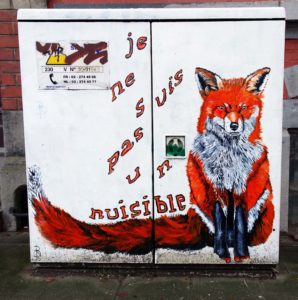 And then I came across a third artist. (I think of this one as the Artist of the nVisible Fox.)

And then a fourth, a fifth…. and more

Still, our local geometric abstract painter seemed the most prolific. Or maybe that was just because I lived on his patch.

A street in Namur

While we were there I concluded this was a Brussels thing. I simply hadn’t noticed any utility box art in other Belgian towns we visited. And then, last April we were back on holiday for a few days. We visited the old citadel city of Namur and walking down a street suddenly realised it was lined with electricity box art. Some of of the art was not in great condition – had not weathered well. This suggested it had been painted quite some time before. Again, I couldn’t decide if it was official beautification or local enterprise.

I always planned to write a blog article about this, but I always imagined I would find out the answer first. Discover whether this graffiti was planned and approved, or whether it was just artists taking matters into their own hands, but I never did.

Going on-line didn’t help me much. Part of the problem is nomenclature. I’m not the only person who doesn’t know what to call the boxes in English. Mind you, Google searches for “utility box art” and “painted electrical boxes” turn up masses of images while “electrical enclosure art” does not. On Instagram too #utilitybox #utilityboxart and #electricalboxart all find a nice range of images, #electricalenclosureart, not so much.

But complicate this by trying to find the French or Flemish term! Google Translate is its usual half-arsed self. (Judging by the pictures returned by art de la boîte d’utilité as a search term.)

I wish I could decorate an electrical box

Following up on some of the web articles illustrated by the pictures the Google search engine found, it seems many US and Canadian towns are deliberately encouraging or promoting utility box graffiti. So much so that at least one article I found was complaining about it. …when have you ever looked at a blank electrical box on the street and thought, “Gee, I wish someone with moderate artistic skills would paint a toucan on that?” Please Stop Painting the Electrical Boxes. The author is Rainey Knudson. He goes on to write: No artist ever woke up one morning and spontaneously said, “I sure wish I could decorate an electrical box!” But I think he’s wrong. Just because some places promote graffiti on electrical boxes doesn’t mean that in other places – in Gothenburg for example – where graffiti is less than welcome, graffiti artists would never consider utility boxes as legitimate canvasses.

In fact, it may very well be chicken-and-egg: which utility box art came first –  illegal graffiti or sanctioned graffiti?

But I still don’t know what’s going on in Brussels. Perhaps someone reading this will be able to enlighten me? 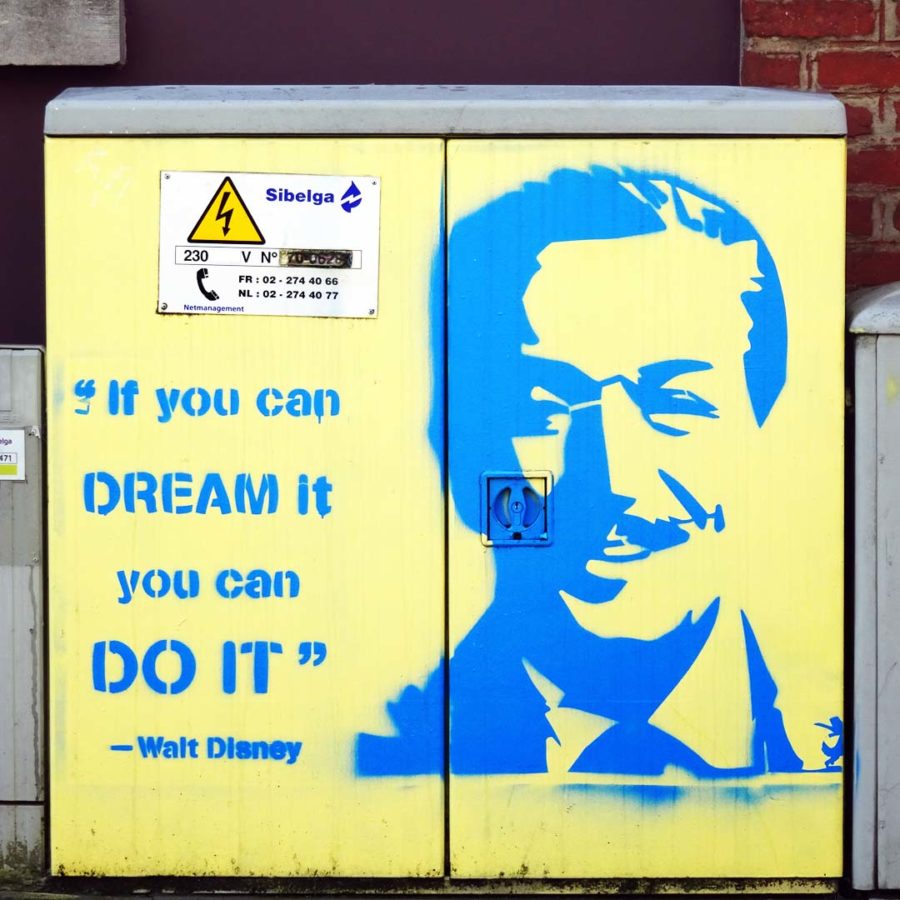 2 thoughts on “Utility box art in Gothenburg and Brussels”